Postpartum Depression & Anxiety — Expert’s Views on How to Handle it 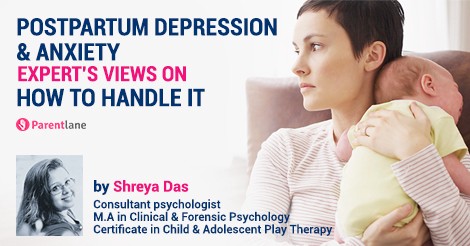 It is never so easy to become a mother. Giving birth to a child is considered to be a blessing to women. But soon after the child comes home, many mothers cannot just enjoy that blessing, the happiness, the euphoria that she’s supposed to or expected to feel.

Instead, they feel anxious, low and some terrible restlessness inside themselves which cannot be explained. Yes, not every new mom faces this, but there are many who can affirm that they do.

Yes, mothers feel ashamed of talking about these feelings as they know that they should feel happy, since that is what’s ‘’expected’’ of them, they should feel proud but sometimes those feelings do not come from within. It’s true that majority of mothers suffers from these feelings or symptoms that has its own name “Baby Blues” and in more severe form “Postpartum Depression.”

A woman who has played her role as a daughter, as a student, as a professional, as a wife, as a daughter in law successfully, feels nervous after getting a new character to play for the rest of her life- A MOTHER. After becoming a mother, a woman has to change her entire lifestyle staring from her food habits, sleep patterns to her relationships, priorities.

During post delivery period, mothers experience mood swings, sensitivity to criticisms, poor body image, irritability, crying spells, anxiety. All these symptoms of “BABY BLUES” generally start from 2–3 days post-delivery and can last for 2–3 weeks. But when these symptoms are ignored, it takes a more severe form with a feeling of hopelessness, sadness, despair, inability to take care of the child, reduced interest, difficulty in maintaining relationship with partner, difficulty in sleeping, learning, focusing and memorizing. Symptoms of postpartum depression can arise any time during the first year of motherhood and last longer than expected.

So, rather than feeling guilty or hiding these emotions, it’s better to be aware of them and take necessary steps to resolve the issue. These simple steps can bring a lot of change in new mothers.

1. Create a secure bond: It is very important to create a strong emotional bond with your child soon after she sees the light of this world. It has been seen that mothers who feels low during this time, breastfeed less, talk, hug, read less with their child. Talking with your child while feeding, smiling with her, hugging her when she cries creates a secure emotional attachment.

Many mothers follow all these but in an inconsistent way. Nurturing, caring and spending quality time with your little one in a consistent way can create a healthy atmosphere which is beneficial for both mother and child.

2. Ask for help: During post delivery period, a new mother needs support, encouragement from relatives, friends and people around her. Most of the mothers, who are having these symptoms find themselves lonely. So, instead of hiding, it’s better to open up and share your feelings with others and ask for help.

3. Prioritize your baby and yourself: Make your baby and yourself priority number one. Avoid domestic work and rest as much as possible. Breathing exercise, mindfulness, meditation, healthy eating habits, walking at least 10–15 minutes on regular basis can make a big difference. In this period, most of the mothers spend entire day with their child and thereby often become exhausted, leading to irritability and mood swings. This irritability often comes out in the form of yelling, shaking child harshly. So, TIME OUT is needed. Giving yourself some quality time can help. Whenever you feel exhausted, give yourself some time and allow your family members to take care of your child during this period. Furthermore, new mothers should sleep more but it becomes a great challenge. Lack of sleep can make these symptoms worse. So, take a quick nap while your baby is sleeping.

So, by maintaining all these, a new mother can deal with her emotions and baby blues.