Effective Ways To Trick Your Toddler Into Eating Vegetables 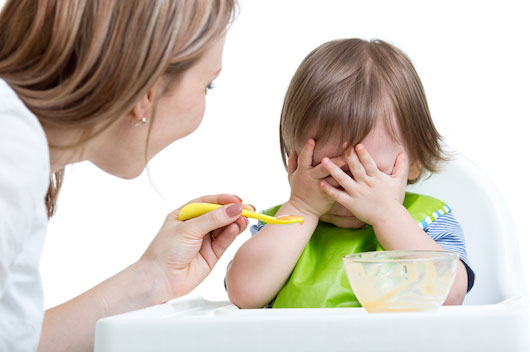 One of the first things that you notice when your baby becomes a toddler is that he become a fussy eater and he refuses to eat his vegetables. This is the age at which he discovers his independence in his power of exerting it. One of the things that he can control is the food that he eats. This is why you see that on certain days he eats as though he has been starving while on other days he absolutely refuses to eat anything. Mealtimes then become a power struggle between the two of you. You become aggravated when he refuses to eat healthy vegetables while he prefers fried junk food.

Here is how to trick your toddler to eat vegetables:

Let’s look at some ways by which you can trick your toddler into eating vegetables. Some of them may look doubtful but hey, whatever works!

Research has shown that when you pair vegetables with food that your toddler is not inclined to, he is more prone to eating his vegetables! For him, it is a matter of choice for the better of the two unfavorable food items on his plate.

One of the most common and popular methods is converting the vegetables into smoothies. It is also one of the most successful ones and why not? For example, you can add a half cup of spinach, half of a small banana, some honey and almond milk or water in the blender and your toddler won’t even know about the spinach! You have numerous such recipes that mask the unfavorable flavors and trick your toddler into drinking his vegetables!

Almost all toddlers love popsicles and arguably most adults do too. You can sneak in lots of greens and vegetables hidden within fruit juices and pop them into the freezer to make colourful and tasty popsicles. Isn’t it a cool way of tricking your toddler into taking those veggies?

When you coat vegetables with butter, its taste increases. Butter also contains vitamins A, E, and D3, which are vital for growing toddlers. The added fat of the butter will also help in absorbing the vitamins from the vegetables better.

Give your toddler the choice

Offer your toddler a choice of two vegetables. This will make him feel important and he will pick a vegetable for himself. Vary the vegetables each time.

Sous chef of the house

Get your child to be your helper in the kitchen. When he takes part in helping you prepare a meal, he is more likely to eat it as well. While making the meal, you can casually explain the benefits of each ingredient and tell him how it will make him healthy, strong and powerful like his favorite superhero.

Take him along with you to the market when you go vegetable shopping. Get him to help you pick vegetables. This will make him feel involved. Later, when you serve him vegetables, you can remind him that he was the one who picked it from the market.

There are numerous videos on the internet that show favorite cartoon characters or superheroes eating vegetables and advocating it. Show it to your toddler as it may trick and motivate him into eating more vegetables.

If your toddler refuses to eat certain vegetables, don’t give up. It is said that it takes ten to twelve times of tasting a food before a child starts accepting it. Do not forcibly give it every day but do try to sneak it now and then till he acquires the taste for it.

Do keep in mind that toddlers seldom follow a fixed timetable or eat the same quantities. Don’t force feed your toddler or be upset when he doesn’t eat a certain quantity. Even a bite of vegetables is better than not having any and will help him acquire its taste in the long run. This is just a passing phase. Don’t let mealtimes be a power struggle. Just make it a positive experience by setting an example and having fun. Persistence does pay in the end.

For daily interesting homemade recipes for your child, check out the Parentlane app