Impact of T.V. on your Baby’s Speech Development — Expert Speaks

In recent years, television has become a major part of our lives. It’s not only television, but use of smarphones and gadgets like tablets, PSPs, laptops, is increasing day by day. Due to huge socio-economic pressure, new aged parents get little time to relax and enjoy nature and outings, and so screen time plays a major role in their entertainment. Babies and toddlers are also not out of this zone. 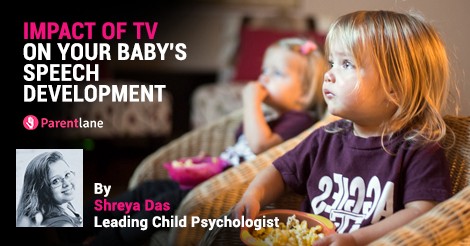 New aged cartoons, videos, animations are catching their attention and since they do imitate a lot from their parents, spending time on screen has also become common among the little ones.

Early developmental age is very crucial for each and every baby. One of the major developments that occurs in this stage is language and speech development. During the initial few years years, babies acquire information from the people and environment around them. Increased amount of mobile or television watching hampers their information acquisition process.

Fast paced videos, tonal quality of videos inhibit a child to learn a new language. From 1 year onward, babies start imitating people around them. Therefore, rather than depending on screen, increase in communication verbally can boost a child’s speech development in a better and effective way.

Despite every modern techniques, two way communication that is, communicating directly with children is the most basic and best way of speech development till date.

According to a research by Chonchaiya and Pruksananonda (2008), children watching television before 1 year for more than 2 hours per day were six times more likely to have language delay. There are many more studies, which show that increased amount of television watching, use of mobile, leads to delayed development of speech and language in children.

The American Academy of Pediatrics discourages television and other media use by children younger than 2 years and encourages interactive play. So, while applying this, parents also need to resist themselves from screens.

Although there is no hard and fast rule, but the more parents will restrict their screen time, the more they will help their child to develop in a versatile way. Some alternatives that can be used in place of screen time are:

There are hundreds of techniques that parents can apply. It also helps in creating good bonding with the child.

Many parents visit my clinic saying that without television, mobile, it becomes impossible to handle their child as they show such behavioural problems like stubbornness, shouting and if the T.V. is turned on, they become very quiet. So, I ask them, ‘’What is more important to you? The immediate relief or the long-time relief?’’

The choice is completely up to the parents. If they opt for long term relief, they have to be more patient, calm and innovative to deal with their children, since short term relief will only quieten the kids for a while but in the long run, make them all the more stubborn and adamant, which is not right.

15 Common Tooth Problems and Home Remedies for Them

Self-Feeding Skills in Toddlers: Teaching Your Toddler How to Feed Himself